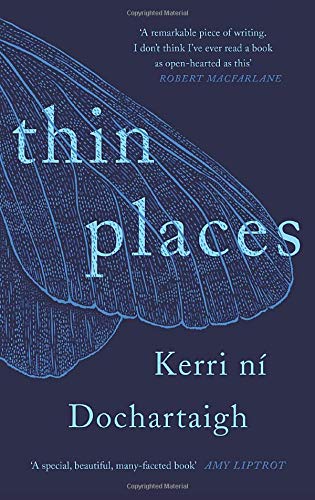 The Irish writer Kerri ní Dochartaigh’s debut work of memoir is a deeply moving account of a traumatic childhood in a Northern Ireland riven by sectarian violence—and the sanctuary she found in the natural world.

Kerri ní Dochartaigh was born in Derry, Northern Ireland, at the height of The Troubles—to a Catholic mother and Protestant father. This uneasy status alone was enough to mark her family out for unwelcome attention from the start, and her powerful memoir Thin Places describes a traumatic childhood marked by violence and fear, and how these experiences imprinted themselves on her psyche.

At six, a soldier was shot dead in front of her. At eleven, her house was petrol-bombed. Later, as a teenager, a close friend would be suddenly and shockingly murdered. All events that, in and of themselves, might haunt a person for the rest of their life. “I carried the darkness around with me like a big black crow, for a really long time,” she has explained. But recently, she writes, she has slowly, surely struggled her way towards the light. This book is a record of her emotional metamorphosis.

Ní Dochartaigh has a singular voice. Her poetic, almost magical-realist prose is perhaps experienced to its best effect when read aloud (I recommend the audiobook version, read by the author), and her interweaving of personal revelation, nature writing and mythology will likely appeal to fans of Amy Liptrot and Olivia Laing.

Digging, as it does, into mental illness and suicidal ideation, it is not always an easy book to read, but ní Dochartaigh is—to her credit—unafraid to confront some of her own worst impulses, and to interrogate them. Her account of the troubled beginnings of her long-term partnership with a gentle, older man is painful in parts: having moved into his home quickly, Kerri then sinks into a period of profound emotional disturbance during which she is often irrational, even borderline abusive; she finds herself perpetuating the cycle of trauma that plagues so many Northern Irish families. But, with the help of her devoted ‘M’, she pulls back.

At the end of the book, having journeyed so far together, and through such darkness, you cannot help but feel proud of how far she has come. “There is a very particular type of wisdom that is born out of witnessing unimaginable cruelty,” ní Dochartaigh writes. And so there is. This book is the evidence.

Thin Places is your first book. Could you tell our readers what it’s about, and what led you to write it?

This is a book about growing up in Derry-Doire-Londonderry during The Troubles, and about making peace with both the traumatic experiences I had there, and the way they subsequently left me feeling about myself. It’s about the natural world, politics, identity, language, healing and lots in between. I wrote it because I felt like the book needed to be written. It was like having a wild creature inside me, clawing to get out. I hope that this book will help others to speak of things they do not need to carry on their own.

Could you explain the concept of ‘thin places’ – where it came from, where you have experienced it?

In my twenties, I experienced the hardest time with my mental health that I ever had known. I turned to very particular places to try to navigate it all. Slowly, and with very little consciousness of what I was doing, I began to take myself into places where vast but quiet shifts took place in me. I don’t know if such places as Grianan of Aileach, Treshnish on the Isle of Mull, Mwnt cove on the Ceredigion coast or the Cornish Merry Maidens have a name in any other language. In Ireland, these places are often referred to as áiteanna tanaí, caol áit – thin places. Heaven and earth, the Celtic saying goes, are only three feet apart, but in thin places that distance is even shorter.

They are places that make us feel something larger than ourselves, as though we are held in a place between worlds, beyond experience. Some places are ports in what can be – for many people – a life both unsettled and stormy, spaces in which you can leave that which is familiar, all that you hold to be true, and move closer to all that is unknown. Closer to what some may view as the divine, the otherworldly: that which is rooted in something both constant, yet continuously ebbing and flowing.

They are in many ways a form of stopping place, liminal space that feels like it has been set aside for silence and deep, raw solitude. To carve out room within ourselves – unintentionally, even – to imagine what lies beyond the here and the now. Places where the veil is thin allow for pauses in the flow of what we know – or think we know – of time. A place to imagine what it all might mean, how we have been, how we maybe could be – a space to more clearly see a way through.

The book grew out of this viral essay you wrote for Little Toller. In both, you write of learning Irish Gaelic almost as an act of devotion. Could you talk a little more about this?

For me, the delicate art of paying attention is always an act of devotion. Tuning our ear and heart and soul to the language of our bones – listening to the music that made us who we are – is a way to learn much that might otherwise pass us by. We are losing so much and have been for too long to fully comprehend. In Ireland the loss of our language feels, to me and others, intrinsically linked with many other losses. The ripples of the loss of our native tongue travel far, and I firmly believe that in taking steps towards unearthing that part of our identity, we also move towards a timeless place; neither rooted in the past, nor in an unimaginable future. A place, rather, where we might begin to heal, learn, remember and let go. With any journey, often that very first step we take is the most important of all.

What writers, would you say, have been your biggest influences?

Oh that’s such a hard one to pin down! I feel like I’m influenced by every single thing I read but perhaps some writers have guided me through a wee bit more than others. I’ve always been drawn to strong female voices, and adore the work of Doireann Ní Ghríofa, Sinéad Gleeson, Sara Baume, Amy Liptrot and others. Recently I’ve been reading lots about land and its history, and writers like Lauret Savoy and Robin Wall Kimmerer have influenced my work a lot this last while.

Poets influence me a lot too – Alice Oswald, Audre Lord, Nancy Campbell, Kathleen Jamie, Liz Berry – to name a few. Aggghhhh, that doesn’t even nearly touch it though! So many writers influence me. I’m so grateful to be able to read words others have written.

You are currently pregnant with your first child, and have written about the importance of instilling in children the value of the natural world. Do you have any thoughts on how to do this?

I believe we are born with an intrinsic awe, respect and love for the world around us. The question is not how to instil this in children but how to ensure the things, beliefs and people they encounter do not knock it out of them…That is a difficult task because so many of the systems that are inbuilt in the society in which we live do not allow for equality between humans and the rest of the natural world. I wonder if maybe we are moving to a place where equality between species will be much more on our minds and in our hearts, just now? I hope, through how my partner and I have chosen to love, that we will give our all to allow our child to grow up knowing it is one creature on a planet full of many creatures; each as valid and as deserving of respect as the other.

Do you consider yourself a ‘nature writer’?

I wrote this pocket guide for Spread The Word on nature writing, and found it so interesting to unravel some of the ideas around this term… To be honest, I have never categorised myself as anything other than a ‘writer’ who writes about nature, literature and place; which I think are such broad subjects if we really unpack them that they cover almost everything in this glistening, aching world. I don’t view human beings as separate from the natural world, and that idea of how best to share space with both the human and the non-human informs how I live and how I view the world daily. I simply write about the things that move me – an ever-shifting set of things depending on the seasons, the stage of life I’m at, and a plethora of other things. Recently I’ve been drawn to write about moths and birds, islands and nests – but also about sentences and train-lines, rusted hulls of old vessels, visible mending, the affects of trauma on young people and the way that the heartbeat of the see-through creature inside me sounds like boats in a harbour as they rattle against each other in winter winds.

(What is nature writing if not the constant riotous act of starting again? Of learning, again, to listen and to look, to draw close and keep our distance, to break and to weep; to get back up and love the world afresh?)

Has it been challenging to write about (and now talk about) your struggles with depression? Have you found support or fellowship in doing so?

To be honest it was so hard for so long that now that I’ve started to talk about it I feel like it’s something we all should feel we can do. It’s so important to break silence on things – on many things, I think – and mental health is a crucial topic to feel safe and comfortable in discussing. I was extremely lucky to have unflinching mentors along the way in writing this book, and both an agent and editor who encouraged me to face what I had been through head on; who helped me to see that through sharing my story it somehow became a universal story. Not that I would ever dream of speaking on behalf of anyone else and their experiences, just that I hope that if someone reads Thin Places, they might see parts of their own story reflected back – and might feel more able to share parts of it they have felt forced to keep silent about. I’ve been shown such love and support in the sharing of this story, and I am so grateful for it.

What are you reading right now?

I have a massive TBR pile right now and all I want to do is curl up by the stove with them all! Right now I’m reading a proof of Rebecca Schiller’s incredible memoir Earthed, due out with Elliott & Thompson in May, alongside Elizabeth-Jane Burnett’s latest poetry collection – Of Sea – also due in May with Penned in the Margins. I love her work so much, and this collection is utterly exquisite. I’m already itching now to reread her hybrid memoir The Grassling. I’m drawn just now, as I mostly always am, to strong female narrative that explores those spaces often left in the dark; those experiences and things that so much need voiced.