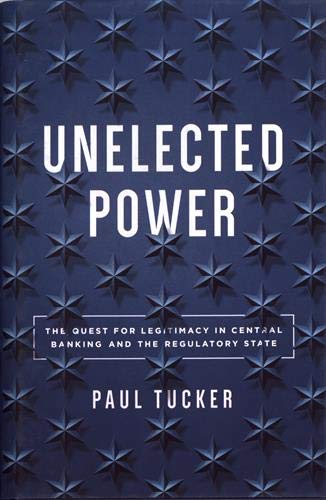 Unelected Power: The Quest for Legitimacy in Central Banking and the Regulatory State

Paul Tucker, former deputy governor of the Bank of England, looks at how unelected bodies can and should be made accountable in a modern democratic society.

In February 2019, Greta Thunberg, the 16-year-old Swedish schoolgirl, climate activist, and leader of the global School Strike for Climate, addressed a conference full of EU politicians and officials in Brussels as part of her campaign to accelerate the global response to climate change. She told her audience, “We know most politicians don’t want to talk to us. Good. We don’t want to talk to them either. We want them to talk to the scientists and listen to them. That is our demand.” She raised a laugh. Later, she insisted that the implementation of any response to climate change must be “equitable”. She’s right, of course, but the question of equity—of who will bear the cost of delivering the UN’s Intergovernmental Panel on Climate Change (IPCC) recommendations—is an inherently political one. There is no absolute answer that is right or wrong. Leaving such a question to scientists or any other group of experts or technocrats will not deliver a universally approved answer, although they may be able to help frame the question. But they are no better qualified to pronounce on the answer than anyone else. It will inevitably be contested—that is why it belongs to the realm of politics.

In Unelected Power: The Quest for Legitimacy in Central Banking and the Regulatory State, Paul Tucker, a former deputy governor of the Bank of England, argues that, at least in part, the rise of populism can be attributed to vast swathes of pubic administration having been given over to unelected bodies, which have ended up with semi-judicial or semi-legislative power and, in the case of central banks, semi-fiscal powers, without clear political control over their decision making. The boundary where politics ends and technocracy—the rule of experts—begins has been blurred, much to the detriment of political legitimacy throughout the democratic world. Tucker sets himself the task of finding the appropriate ingredients for the political supervision of such bodies, so that they remain subject to clear political accountability, thereby rescuing democratic government from the populist charge of a remote and self-serving elitism.

Central banks are first among these independent institutions, with their powers of banking supervision, potentially making rules on how banks can lend and, in a crisis, taking decisions on whether public money should be used to bail them out.  But they are far from alone.  Many independent agencies such as utility regulators and competition authorities enjoy some kind of quasi-rule making or quasi-judicial role. Of course, there is a rationale for this arms-length treatment of some areas of government. Independent agencies can pursue policy objectives, insulated from the pressures of elected office, to the benefit of all but, as  Tucker says, “if delegation-with-insulation is to enjoy democratic legitimacy, the people have to be let in somehow.”

Unelected Power is not bedtime reading. It is involved. Tucker, once he has specified the problem, develops a framework of principles for delegating powers to independent agencies: among other things, that they should have clear but limited powers and objectives; that they be transparent and politically accountable; and that they should have clear operational processes. He then looks at how such agencies fit within a democratic state, without compromising the state’s democratic character. He looks at real world examples, with the final section of the book dedicated specifically to his own particular area of interest, central banking.

Tucker sees preserving the democratic, political accountability of such agencies as an essential safety valve in a democratic society, partly because even experts get things wrong. As he puts it, “the people’s tolerance for the inevitable disappointments and frustrations of government is greater when they can vote out their governors.”

None of this works without a wide-ranging debate about the purpose and operation of independent agencies prior to their creation and continuing public challenge to their efficacy throughout their existence. Accountability requires a culture of political engagement. That culture, Tucker argues, is fostered by good institutional design. The consequence of poor institutional design, Tucker suggests, is populism. Where technocrats govern without accountability and stray into politically contested areas, populism arises to express the true will of the people (however conceived) without the need for reasoned debate. Any area of policy that is highly contested should not be left to unelected experts and, crucially, any decisions that leave some groups or individuals worse off and others better off—that involves distributive decisions—must never be left to unelected bodies, as such decisions are inescapably political.

Would Greta Thunberg enjoy Tucker’s book? Maybe not, but she might benefit from reading it. She would understand why in areas of environmental policy she should be urging politicians to talk to other politicians and the world’s youth, as well as scientists. Tucker argues that the objectives of any independent agency must enjoy a high degree of support, and that has to be tested prior to its creation. In areas where public preferences are not widely agreed, “it is better”, Tucker says, “that policy remain under the control of elected politicians.” He specifically points to environmental policy in this context, noting that “consistent with that, [environmental policy] is typically handled by agencies that bear a partisan stamp.”

Activists like Greta, demanding radical action on the environment now, will have to talk to politicians, or become politicians, if they are going to continue to live in a democratic system. There will be a role for scientists to advise and inform, there may be institutions set up to implement, but they won’t hold the magic formula for a solution to satisfy everyone, or even the world’s youth. Any solution will have to be driven by, and underpinned by, a political process. After reading Tucker’s book, Greta may realise that this, too, is good.