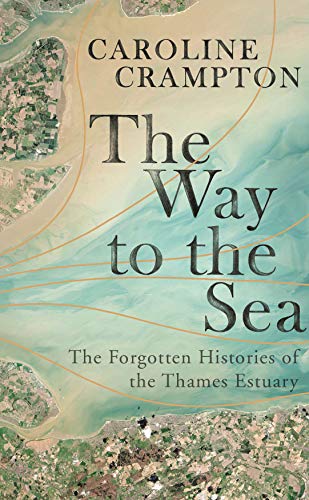 The Way to the Sea: The Forgotten Histories of the Thames Estuary

The Way to the Sea by Caroline Crampton traces the River Thames from source to sea by way of London Bridge and its silty, history-strewn estuary. This is a genre-crossing nonfiction debut from a promising British writer.

We spoke to the author, Caroline Crampton, to find out more…

This memoir by the journalist, podcaster and former New Statesman writer Caroline Crampton blends cultural history, personal reflection and nature writing to create a beautiful book that slips, boat-bound down the Thames and into the broad and brackish estuary where it meets the North Sea.

This is a topic close to the author’s heart, as she spent her childhood sailing in its waters after her parents emigrated – by yacht – from South Africa to the UK. There are lovely passages that highlight the bleak, haunting beauty of an unglamorous stretch of English coastline – sandbanks, mudflats, shifting sandbars, shipwrecks and burial grounds – and draws historical insight from many literary favourites including The Wind and the Willows and Bleak House.

Where is the source of the Thames, and where does it end?

Caroline Crampton: The source is in a field called Trewsbury Mead in Gloucestershire, just outside the village of Kemble in the Cotswolds. It’s oddly low key for a place that has been imbued with such significance — it’s just a field with cows in, and a lot of the time there’s not even any visible water there, because the water table has to be very high for the spring to flow on the surface rather than underground. There is a marble slab there, though, engraved with the words “This stone was placed here to mark the source of the River Thames”. (Some like to make the case for a place called Seven Springs about a dozen miles away as the real source of the Thames, but this is actually the source of the River Churn, which then flows into the Thames as a tributary downstream from Kemble at Cricklade.)

The river doesn’t have such a definite end point. The estuary where the river flows into the North Sea is wide and flat and tidal. Different lines have been drawn across it at different times in history, from the “Yantlet Line” drawn between Southend and the Isle of Grain, which was drawn to mark the extent of the City of London’s control over the river, to the natural boundary made by Shoeburyness to the north and Whitstable to the south, where the land finally curves away from the river. For practical purposes, I tend to think of the point where the River Medway — the final Thames tributary — enters the main estuary as the end point of the Thames itself. Once the two combine and the North Sea opens up to the north and east, it becomes a kind of no man’s land that is nothing like a river any more.

How did you travel along its length?

I didn’t travel along the river in a single journey; I did it as lots of expeditions at different times and in different ways. I walked part of the river from the source and a lot of its distance through central London. I took trains and buses variously through the upper Thames valley, and I also used public transport partly to explore some of its lower reaches. The main journey in the book though is on the water, from Limehouse Dock to the site of the old Nore lightship in the outer estuary. I did this with my parents, on their yacht Cantilena, as a recreation of the sailing trips we took when I was a child.

Why did you choose to write about the Thames estuary?

I grew up there because my parents ended up living in that part of the world after they arrived in the UK by boat from South Africa in 1984 (they built the boat themselves, by the way). This is an amazing story, but for a long time I deliberately didn’t ask them about it — I think in a teenage, sulky way I resented that they were so much more interesting and adventurous than me. It wasn’t until I was much older that I realised how wrong I was about that. At the same time, I began to read more and came to understand that the estuary didn’t really appear in many of the books about the Thames; its landscape was overlooked and pushed out of sight in favour of the more famous landmarks and beautiful vistas upstream. Those two things together made me want to write about it. I wanted to process my own feelings about how my family came to be based in the estuary and I also wanted to show people that it’s a beautiful, brilliant place worthy of the appreciation and attention we give to more conventionally “pretty” places.

Do you have a favourite location?

I became particularly fond of the Hoo peninsula during the time I was researching and writing the book. It’s a spur of land between the Thames and its final tributary the Medway and at the very end is a marshy island called the Isle of Grain. There’s one main road that runs from the neck to the end, and driving down it with nothing but the sea on the horizon feels like flying. There are so many different landscapes packed into this narrow strip of land too, from the muddy, shipwreck-strewn flats of the Cliffe Pools RSPB reserve to the chalky spine of the peninsula where the 13th-century church of St James, Cooling, stands. In the graveyard are thirteen tiny graves, which were the inspiration for the opening chapter of Charles Dickens’ 1861 novel Great Expectations.

Could you tell us a little about the Thames Barrier? What is it for? How might someone visit it?

The Thames Barrier was built after the great flood of 1953 to prevent another incident where a storm surge in the North Sea, a high tide and a fast-flowing full river from heavy rainfall could cause another dangerous flood. It has nine piers built into the riverbed over a concrete sill, and there are huge cylindrical steel gates that rotate up between the piers to create a barrier against the incoming tide and keep the river level safe upstream. When they aren’t needed, the gates are rotated away beneath the water so that ships can still use the river. Each pier has a silver structure on it that I think looks a bit like one of the points of the Sydney Opera House. They’re also deceptively high, standing 20 metres above the river bed.

The barrier stretches between Silvertown on the north bank and Charlton on the south. The royal docks, where the ExCeL centre and London City airport are now located, are just to the north of it and the O2 music venue is about a mile west. There’s a good river path along the south bank, so you can walk along from North Greenwich tube station to the barrier — it’s about a mile. There’s also a visitor centre and exhibition at the barrier where you can learn more about the construction and engineering that keeps it running.

Could you tell us a little about the Maunsell Sea Forts?

They were built during the Second World War in the Thames estuary as semi-permanent operation bases for defensive manoeuvres. There are two groups still standing now: the Shivering Sands forts and the Red Sands forts. Both were built by driving concrete piles deep into the sea bed and then using them to support metal structures where troops could live temporarily while manning the anti-aircraft guns mounted on the top. Since Luftwaffe pilots on bombing missions often used the Thames to navigate their way to London, having these defenses out in the estuary was an attempt to bring down the planes before they reached the city.

The forts have been left derelict in the decades since: they’ve been used various by pirate radio stations, artists, squatters and various other groups over the years. The condition of them is deteriorating — there is a local group campaigning to have them restored as a tourist attraction, but little funding has been forthcoming, and the metal structures are slowly corroding. On a clear day, you can see them from the beaches in north Kent at Whitstable and Tankerton.

Finally: has writing about the Thames made you see London differently?

From all the research and travel I did for the book, I came to see how London disproportionately dominates the way we think and write about the Thames. Only around a quarter of the river’s 215 mile length runs within the confines of the M25 motorway, yet the Thames is habitually called “London’s River” and when we think of the river in art and popular culture, it’s always with a London landmark like the Palace of Westminster or the London Eye in mind. The process has definitely given me a greater understanding of what the Thames is like as an entire river, running through the rural areas of Gloucestershire and Oxfordshire, other urban centres like Oxford and Reading, and of course everything that happens downstream in the estuary. London isn’t the beginning or the end of the river’s story.

Like the Thames itself, this book carries you along on a journey full of rich detail and fascinating insight