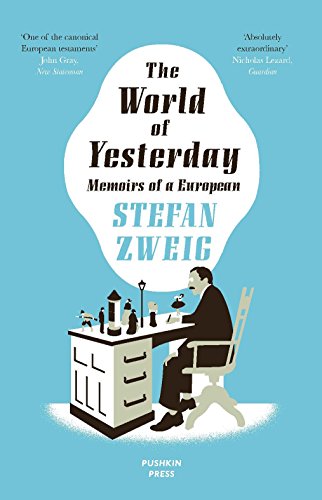 The World of Yesterday by Stefan Zweig & Anthea Bell (translator)

“It is a gripping read, written just before he committed suicide in Brazil…He awrote vividly about witnessing the outbreak of the First World War. A pacifist, he notes the excitement, the exhilarated men and women out in the streets craving to rush off to battle. He doesn’t tell you much about himself or his wife, but describes people, particularly fellow authors, in a very generous manner.”

At its creation as a nation-state in the wake of the First World War, Austria was an odd creation.  It was a smallish land-locked, largely rural country with a capital city, Vienna, that had up until that moment, been the centre of one of the largest and, arguably, most cosmopolitan empires in the world. Our coverage of Austria reflects that incongruity, being entirely dedicated to Vienna and the Viennese.

Even without its empire, in the 1920s Vienna became a global intellectual centre, and was home to many of the people and ideas that shaped the modern world.  The Journalist and philosopher, David Edmonds, chooses his best books on the Vienna Circle of philosophers, scientists and economists who were devoted to ensuring scientific ideas of empiricism and verification at the heart of all intellectual inquiry. Our other interviews all overlap with that. Brigid Grauman, chooses her best books on Jewish Vienna. Peter Hacker looks at the philosopher, Ludwig Wittgenstein, and Peter Boettke covers the Austrian school of economics.

The best books on The Vienna Circle, recommended by David Edmonds

The best books on The Vienna Circle, recommended by David Edmonds

Members of ‘the Vienna Circle’ had strong views on what can and cannot be meaningfully said. They’ve had an enormous impact on modern philosophy, partly because the arrival of fascist rule in Austria scattered them around the world. Here, philosopher David Edmonds, author of The Murder of Professor Schlick, introduces us to their ideas, their milieu and the poignant background to their lives and thinking.

The best books on Wittgenstein, recommended by Peter Hacker

The best books on Wittgenstein, recommended by Peter Hacker

A pioneering figure in analytic philosophy, Ludwig Wittgenstein (1889-1951) is a clear example of philosophical genius. A profoundly intense, tortured, and solitary man, he produced two masterpieces of philosophy with fundamentally opposed views of language — both of which have been wildly influential. Peter Hacker introduces us to perhaps the most important philosopher since Kant, and explains why Wittgenstein would be horrified by Noam Chomsky.

The best books on Austrian Economics, recommended by Peter Boettke

The best books on Austrian Economics, recommended by Peter Boettke

The professor of economics discusses the contributions made by the Austrian School. He introduces recent books by Austrians, explains what we can learn from Mises and Hayek, and argues that economics is the sexiest subject.