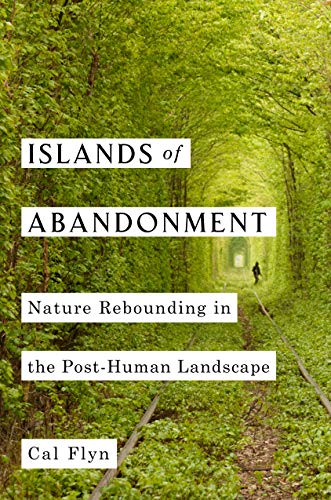 Islands of Abandonment: Life in the Post-Human Landscape

Five Books deputy editor Cal Flyn’s second work of nonfiction, Islands of Abandonment, is a book about abandoned places: ghost towns and exclusion zones, no man’s lands and post-industrial hinterlands – and what happens when nature is allowed to reclaim its place. Exploring extraordinary places where humans no longer live – or survive in tiny, precarious numbers – Islands of Abandonment give us a glimpse of what nature gets up to when we’re not there to see it. From Tanzanian mountains to the volcanic Caribbean, the forbidden areas of France to the mining regions of Scotland, Flyn brings together some of the most desolate, eerie, ravaged and polluted areas in the world – and shows how, against all odds, they offer our best opportunities for environmental recovery.

“What makes it different is that while it’s certainly not a pollyannaish book—it’s not ‘don’t worry about the environment, it’s all going to be fine’—she does find a counter-narrative. She takes us to these desolate places where man has retreated, having apparently spoiled the place for good: Chernobyl, a World War One arsenic factory in France, Bikini Atoll. She goes to these eerie places, these unattractive places, these broken places, places that you wouldn’t wish on your worst enemy, and finds that nature has seeded itself there and is doing interesting things…….Also, although it’s very beautiful writing, the lyricism is really kept under control, for which I’m eternally grateful. Nature writing can become so performative. This is very disciplined. Yes, she can write a beautiful sentence, but it is always in service of what she’s trying to tell us. I thought that was great.” Read more...

“Flyn has decided to go to places where, for one reason or another, the landscape is no longer sustainable for human life and, as may be, for many other forms of life too. The book asks us to consider ‘What is the consequence of all this ruination? What is it likely to do to us as well as to nature?’ The result is an intriguingly twisted and adjusted form of nature writing, applied to sites of catastrophe, slow or sudden, where nature and a few strangely resilient people may be finding their way into a new kind of existence.” Read more...

“This is so beautifully written, it’s poetic. She takes us to a variety of places that we have, frankly, mucked up and then abandoned, or just abandoned. So, Chernobyl where we mucked it up and then ran away; Detroit where the economy collapsed, and there are just all these empty properties; Scottish slag heaps, ‘bings’ they call them, and they’re made from ‘blaes’ which are small bits of shale gravel; a Scottish island where the last people left in 1974, leaving their cattle behind. She then charts what happened next, how nature recovers and copes and, in some cases, invents something else, something that will put up with radiation, say. She doesn’t let us off. There’s no suggestion that ‘it’s okay, whatever we do, nature will survive it.’ You do realize it’s very bad, but it’s a beautiful book.” Read more...

The Best Conservation Books of 2021

Your new book is about ‘the ecology and psychology of abandoned places.’ Can you tell us more?

Yes. In Islands of Abandonment I travel to 13 locations around the world, including the Chernobyl exclusion zone, the no-man’s-land that divides the island of Cyprus, an island off the northern tip of Scotland where a herd of cattle has been living feral since the 1970s, and a ship graveyard in the heavily polluted waters of Newark Bay. Each location has been selected because it emblematises, to me, a different aspect of abandonment – and how nature can adapt and recover in the long shadow cast by human activities.

But because abandoned places, by definition, once belonged to someone, I was also interested in the human stories. Why had these places become abandoned? Who lives there now? How do these sites of dereliction and decay make us feel – and why, perversely, are so many of us drawn towards them?

Did you have a favourite place?

One of my most enjoyable trips was to the former Amani Botanical Garden in the Usambara Mountains of Tanzania. It was built by the Germans at the turn of the 20th century; they planted thousands of species of plants from all around the world in the hope of discovering a new cash crop that would thrive in the East African climate. Now, much of the old arboretum has been absorbed into the Amani Nature Reserve, and it’s an incredibly beautiful place to visit – a cloud forest high in the mountains, best known for its remarkable bird life, but a true storehouse of genetic diversity.

I was there to learn about invasive species – some of the flora planted by the Germans have started to run rampant through these old growth rainforests, causing a great deal of anxiety among tropical biologists and conservationists. But it was a peaceful, temperature place full of giant trees, and fireflies, and croaking frogs, and I had the most wonderful time there walking in the dense jungle and clambering over colonial ruins with my guide Alloyce Mkongewa.

Surprisingly easy, for one thing. I hadn’t realised until I came to organise my travel that many people travel there as tourists every year. One needs an official guide, and to lodge an application with the authorities, but there are many companies that can help you do this, and will provide a driver, an interpreter, food, and even accommodation inside the zone itself. I stayed overnight there in a very simple, but very clean, guest house.

The exclusion zone is enormous – larger than Cornwall (or Rhode Island, if you’re American) – and much of it is very rural. It contains within it two major towns and seventy-four villages. It is now 70% forest. Pripyat is the most famous place inside the zone; it was a company town for workers of the power plant. And to an extent it still is – there are still staff working at the decommissioned nuclear plant, on a strict rota system that restricts their exposure to radiation – but it is dominated by high rise apartment blocks that are in various states of disintegration, abandoned schools and sports halls and supermarkets, and a small amusement park with dodgem cars and a ferris wheel. The reactor core that suffered a meltdown is hidden behind an enormous metal shell. It’s a very eerie and desolate place.

There are lots of books about Chernobyl I would recommend – not least Serhii Plokhii’s incredible, award-winning Chernobyl: History of a Tragedy, and Svetlana Alexievich’s Chernobyl Prayer – but if you are interested in the way that wildlife has rebounded, despite the terrible impacts of ionising radiation, I really encourage you to pick up Mary Mycio’s Wormwood Forest: A Natural History of Chernobyl.

Were you ever frightened?

Yes, sometimes. Abandoned places are often fenced off, and for good reason: there can be unsafe buildings, unexploded munitions, open mine shafts, and all sorts of physical dangers. Often, too, they can become haunts or homes for people who are seeking to drop out of normal society – or find themselves with no other option. In the abandoned Industrial Age-era mills of Paterson, New Jersey, I found a large homeless population living in tents and in derelict sheds; there was a lot of broken glass, rusted metal and drugs paraphernalia lying around. Needless to say, you have to take care of yourself.

My trip into Zone V on the Caribbean island of Montserrat – an official no-go area, encompassing the former capital which is now under several metres of solid ash after it was overcome by pyroclastic flows during the 2000s – was also quite nerve-racking. I was with a local guide who carried a radio, and we stayed in constant contact with the local volcano observatory who would warn us if there was a spike in seismic activity. Although there hasn’t been a major eruption there for some years, the volcano is known for its unpredictability. Sunny, my guide, kept the car with its engine running and pointing in the direction of the exit. In the event of an eruption, he said we would have around 90 seconds to vacate the zone.

Probably, for me, the most nerve-racking things is the overriding sense that you shouldn’t be there. Whether that’s because you have expressly ignored warning signs, or simply absorbed the sense of neglect and desertion, I often found that I had an instinctive and powerful reaction to these places that both attracted and repelled. They are thrilling and terrifying all at once. I think the adrenaline rush of hopping through a broken window, or swinging open an unlocked door on rusted hinges, is what draws urban explorers to places like this again and again.

It’s a nonfiction book in which I travel to 12 locations around the world, studying how nature rebounds in the absence of humans. These sites include the Chernobyl exclusion zone, the no-man’s-land that splits the island of Cyprus in two, a former fortress island off the coast of Scotland, a mothballed laboratory high in the Tanzanian cloud forest, and the evacuated former capital of Montserrat in the Caribbean, which has now largely been subsumed by volcanic ash.

I’m also interested in how abandoned places – their aesthetic, their atmosphere, their marginal status – make us feel. For that, I visited and interviewed residents of so-called ‘blighted’ neighbourhoods of Detroit (ones in which there are very high proportions of abandoned houses) and hung around in some industrial ruins with urban explorers who seek the thrill of stepping ‘off the map’ into an uncontrolled environment. What unites these strands is that sense that society has lost or surrendered control in these places.

The best books on Abandoned Places recommended by Cal Flyn

Other books by Cal Flyn