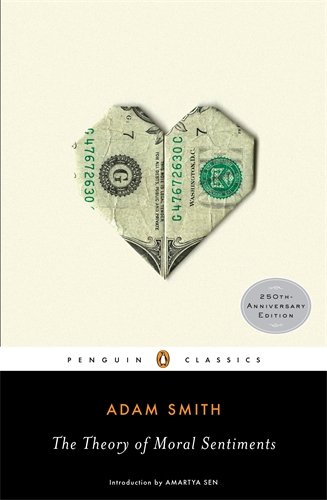 The Theory of Moral Sentiments

The Theory of Moral Sentiments, first published in 1759, was based on lectures on ethics Adam Smith gave after becoming a professor of moral philosophy at the University of Glasgow. While Smith is better known for his later work, The Wealth of Nations (published in 1776, the same year as America’s Declaration of Independence), which described the workings of the capitalist economy, Smith himself considered The Theory of Moral Sentiments the better of the two books. More than two centuries later its observations and insights continue to be relevant, as our interviews with politicians, economists and philosophers below make clear:

“In The Wealth of Nations, he argues for education for those who are involved in repetitive, menial work, because he says that this kind of work has a detrimental psychological effect, that it atrophies the mind…Wollstonecraft very much believed in this. She understands that we are in a world in which the division of labor is going to become more and more intensive, and this will have a psychologically atrophying effect on human beings.” Read more...

“Smith has an interest in exposing human traits that are relevant to thinking about our daily lives, and he has a surprisingly insightful ability to do that.” Read more...

The best books on Capitalism and Human Nature

“The Theory of Moral Sentiments is a book of moral theory, looking at where our sense of morality comes from and what morality consists of.” Read more...

“I love The Theory of Moral Sentiments and I read it every couple of years, because I know I don’t fully understand it and if I read it again I will get some new insight on it. For me the essential part of it is his description of human nature, that there really is inherent in every human being, a striving to win the favour of others by doing right things. I think it’s a complement to Wealth of Nations – I don’t think you can have a society as he describes in The Wealth of Nations, without also having understood the nature of human striving. Look, a young man who dropped out from Harvard, didn’t go to Albuquerque New Mexico in order to build a personal computer operating system in order to make ten gazillion dollars. He did it because he wanted to win the favour of others by doing something that he enjoyed, that he found stimulating and saw value and worth in, and the fact was he then made a gazillion dollars.” Read more...

The best books on Compassionate Conservatism

“Smith’s analyses and explorations are of critical importance for any society in the world in which issues of morals, politics, and economics receive attention, and The Theory of Moral Sentiments is a global manifesto of profound significance to the interdependent world in which we live. This is indeed a book of amazing reach and contemporary relevance.”

Amartya Sen, from the Introduction to the 2010 Penguin Classics edition

Other books by Adam Smith 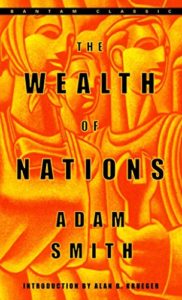 The Wealth of Nations
by Adam Smith