The Walter Scott Prize seeks to highlight the very best of historical fiction—and in 2021, we find the shortlist dominated by Australian writers. Katharine Grant, the acclaimed novelist and chair of the judges, returns to Five Books to discuss the cream of this year's crop, and the art of transforming the historical record into a creative exercise.

Thank you for agreeing to talk to us about the Walter Scott Prize‘s 2021 shortlist of the best historical fiction, as you’ve done now for three years running. How many books did you consider this year, and how did the judging process work?

We had a record 129 submissions for the Walter Scott Prize this year, and of course the books weren’t written in lockdown: books eligible for the 2021 prize were all published in 2020. Each book is considered through the lenses of the Walter Scott Prize’s criteria: ambition, originality, innovation, durability and quality of writing—and in line with ‘’Tis 60 years hence’, the subtitle of Scott’s novel Waverley, over half of any book submitted to the prize must be set more than sixty years ago. Scott’s sixty years wasn’t arbitrary: by settling on a time he judged to be beyond living memory he turned historical record into a creative exercise, or the history book into the historical novel, if you like.

Have you noticed any trends in historical fiction from the past year’s submissions?

Not trends, exactly. We always have an extensive span of time, place and events. This year’s longlist stretched from 1500 England to 1941 Russia, taking in Tasmania, East Africa, Indonesia and Switzerland. More noticeable is writers tackling historical fiction in new ways, for example Paul Griffiths’ Mr. Beethoven, with its very singular premise and construction, and Mark Blacklock’s Hinton, which pitches us into the fourth dimension. 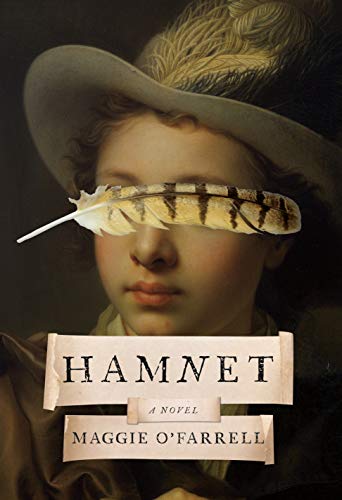 That brings us to the shortlisted books themselves. Shall we start with Maggie O’Farrell’s Hamnet? A true publishing phenomenon. What marks this out as one of the best historical fiction books of 2021?

It’s a great story, isn’t it, and beautifully told. Maggie O’Farrell’s prose is smooth as silk. You can almost run your hand over it. But what readers experience is the top of the writerly iceberg, the visible peak below which, unseen by the reader, pulses the solid, confident and inventive technical skill of the true novelist. Look at how deftly Maggie O’Farrell deals with time. Back we go, and forward, but we’re never lost. And see how she ensures that Shakespeare’s wife and children are never overshadowed by their father. In less skilled hands, not naming Shakespeare would grate and fail. With Maggie O’Farrell, this not-naming seems effortless and natural. As we said in our judge’s quote, a bravura performance.

Next up, Hilary Mantel’s The Mirror and the Light. It’s the third and final book in her Thomas Cromwell trilogy. It has provoked, perhaps, a more subdued reaction compared to the first two instalments, both of which won the Booker Prize; it was unlucky to come out just when it did, I felt—right as the Covid crisis hit the UK—although personally I enjoyed it a great deal. What did the judges think?

No subdued reaction from the judges! Writing a book that closes a trilogy but also stands alone is in itself a challenge that defeats many, but that’s the least of what Hilary Mantel achieves. The Mirror and the Light isn’t just a miracle of imagination, with even the smallest character—Dick Purser, keeper of the guard dogs, Sexton the fool—completely vivid and memorable, it’s also a miracle of pace. We start with an ending—Anne Boleyn’s head has just been severed.

Nobody does an execution like Hilary Mantel. If you haven’t already read A Place of Greater Safety, her French Revolution novel—

One of my favourite books.

—just see how she manages the executions of Desmoulins and Danton.

In The Mirror and The Light, after this heart-stopping panorama, the pace slowly but inexorably increases as the complications of Cromwell’s ambitions and responsibilities multiply. We know what the end will be, but the tension, the tension! 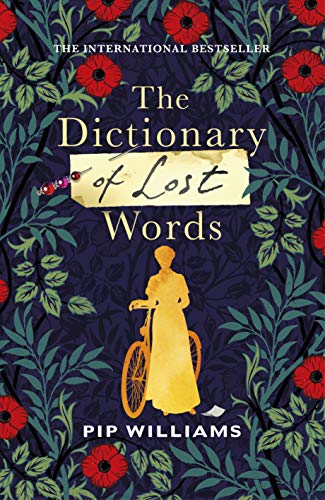 The Dictionary of Lost Words

Could you tell us about Pip Williams’ The Dictionary of Lost Words next? It’s a debut novel, which is remarkable given its enormous success: it’s been an international bestseller and now shortlisted by the 2021 Walter Scott Prize as one of the best recent historical fiction books. What’s it about, and why do you like it so much?

Writing a novel about words is a tricky business, ripe for accusations of pretentiousness. How has a debut novelist managed? I think there’s only one phrase for it and that’s ‘with love’. Pip Williams writes with such love. The Dictionary of Lost Words is the kindest book you’re ever likely to read. But don’t mistake me. Pip Williams’s kindness isn’t of the sweetly insipid variety. Rigorous, full of insights and honesty, always avoiding the stereotype and the obvious ploy, we’re with a writer whose gentle authority touches places that flashier novels never quite reach (to coin a phrase). This isn’t luck. The Dictionary of Lost Words is as carefully constructed as the Oxford English Dictionary whose creation is the novel’s setting. Notice the way Pip Williams moves Esme’s story along, with just enough time to absorb but no dwelling where there’s no need to dwell. And Esme’s story is an important one. Lost words, usually women’s words, need to be found. In this novel we find them, and a great deal more besides. 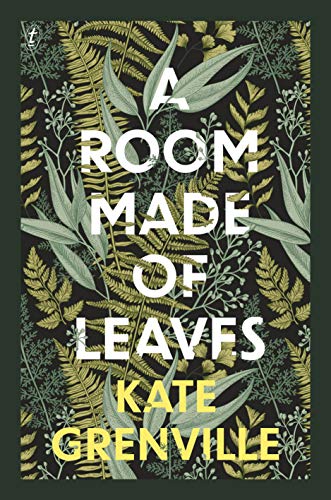 A Room Made of Leaves

Thank you. Let’s move on to Kate Grenville’s highly anticipated A Room Made of Leaves. She’s the author of the very wonderful, Booker-shortlisted The Secret River. Why have you selected it for the 2021 shortlist of the best historical fiction?

‘Highly anticipated’ is such a difficult phrase for authors! Stress levels are high, particularly when the author has decided, in effect, to turn history inside out. Kate Grenville has taken the bland letters of Elizabeth Macarthur, wife of John Macarthur, the so-called ‘father of the [Australian] wool industry’, and read between the lines to give us an alternative story. And what a compelling tale she’s woven, of a canny, resourceful woman, not perfect by any means, but who, through her own efforts and ingenuity, is transformed from reluctant Australian immigrant, a victim of sorts, into a vigorous and successful matriarch.

A Room Made of Leaves doesn’t shy away from the moral complexities of opportunity and exploitation of late eighteenth century colonialism, but Kate Grenville is one of those generous writers who leaves the reader to think for themselves. And that’s not all. I haven’t even mentioned her exploration of the nature of home, or of nature itself, both strong themes, or the mysteries of desire, or the quietly observed joy of a woman ‘breathing the sweet air of solitude’. Highly anticipated, and fulfils all its promise. 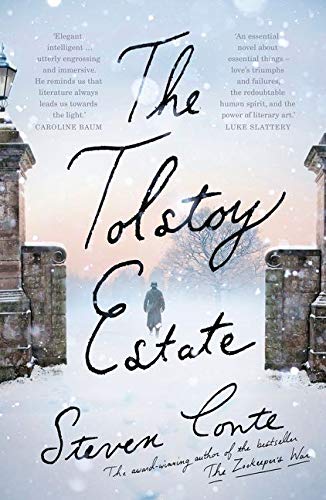 And, finally, we have Steven Conte’s The Tolstoy Estate. It’s set during the German invasion of Russia, during the Second World War. It’s been a big hit in Australia, and though I think it can be a bit trickier for American and British readers to get hold of, it’s worth the effort. Why do you admire it so much?

Control of material, perfect pacing, absolute grasp of war’s absurdities as well as its tragedies—what’s not to admire! Steven Conte’s writing is direct and compelling—the chapter describing a forty-hour shift of operations on the wounded is a masterclass of relentless horror and humour. But The Tolstoy Estate is much more than just a war story and, indeed, much more than a triumph of writerly techniques, although the abrupt change of perspective in the middle really is a triumph. This novel is also a love story and, with most of the action taking place at Yasnaya Polyana, the former estate of the Russian novelist Leo Tolstoy, it’s also a love-through-literature story. But now I come to think of it, the word ‘admire’ sounds as chilly as the Russian winter into which Conte pitches the reader. We did admire this novel—it’s absolutely admirable. But we loved it, too.

Ha! Noted. I couldn’t help but notice an Australian trend among the shortlistees. Does that reflect an uptick in historical fiction writing in Australia more generally?

I’m not sure. Even three swallows don’t make a summer. But if Pip Williams, Kate Grenville and Steven Conte set the standard, we can expect more literary treats to emerge from Australia in the years to come.

Katharine Grant is a British novelist and has been a judge for the Walter Scott Prize for historical fiction since 2017. Her novel Blood Red Horse was a Booklist Top Ten Historical Fiction for Youth and a USBBY-CBC Outstanding International Book for 2006. The sequel, Green Jasper was shortlisted for a 2006 Royal Mail Scottish Children’s book award. She has ten novels published to date. Sedition, her first novel for adults, was longlisted for the 2014 Desmond Elliott prize.

Katharine Grant is a British novelist and has been a judge for the Walter Scott Prize for historical fiction since 2017. Her novel Blood Red Horse was a Booklist Top Ten Historical Fiction for Youth and a USBBY-CBC Outstanding International Book for 2006. The sequel, Green Jasper was shortlisted for a 2006 Royal Mail Scottish Children’s book award. She has ten novels published to date. Sedition, her first novel for adults, was longlisted for the 2014 Desmond Elliott prize. 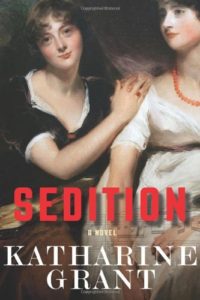 Sedition: A Novel
by Katharine Grant