Joseph Stalin was the leader of the Soviet Union from 1924 until his death in 1953 and as one of the great political monsters of the 20th century—responsible for millions of unnecessary deaths—he's also a subject of fascination with a lot of books written about him. Born Joseph Dzhugashvili in Georgia, then a part of the Russian Empire, in 1878, he remains the epitome of the dictator able to transform their country through violence and sheer political will. His legacy continues to haunt Russia, long after the collapse of communism, with President Vladimir Putin openly admiring his strong-man political character.

Anne Applebaum’s Gulag: A History explores the structure of the system of mass incarceration and terror through which he ran the Soviet Union. The classic Eastern Approaches, by British diplomat Fitzroy Maclean, gives a firsthand description of life in Moscow during Stalin's show trials. For a novel laying bare how Stalin maintained control, British historian and Russia specialist Orlando Figes recommends The First Circle by Aleksandr Solzhenitsyn.

Stalin's personality can be explored through Milovan Djilas’ first-hand account of Stalin’s ‘court’. In Simon Sebag-Montefiore’s Young Stalin you can find the man behind the monster and understand something of what formed him and what drove him (he even trained briefly as a priest). In Stalin’s Library and Stalin’s Scribe you can his relationship to culture and Russia’s literary world. Stalin was an avid reader and had a library of more than 20,000 books; many have his jottings in the margins. 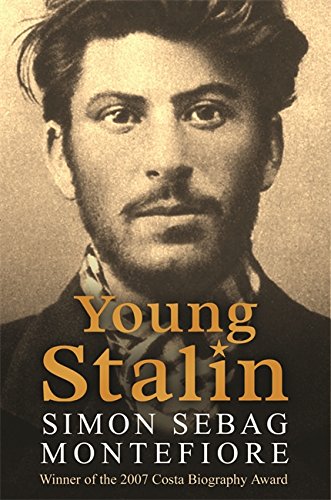 “You can see in the young Stalin considerable signals that he is a very strange man of certain twitches, but a man of great charisma. I suppose the question that Sebag Montefiore doesn’t ask is whether Stalin’s imprisonments made him worse than he would have been otherwise. Stalin was a great bank robber, the Butch Cassidy of the Bolsheviks. He was not a hugely advanced thinker but he definitely had a sense of what was wrong with his time and place.” Read more...

The best books on Revolutionary Russia 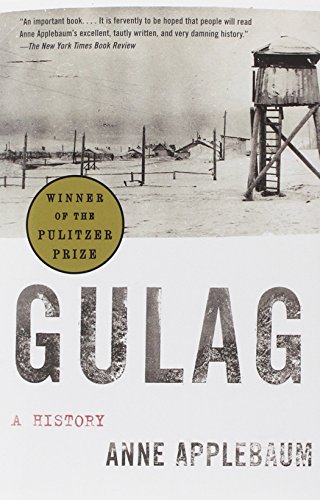 “To see what Stalin did to Russia, the best book is Anne Applebaum’s Gulag: A History. Based on detailed archival research, she tells of the sudden arrests, the sham trials, the gruelling transportation, the hardships of labour camps, starvation and disease – and also the way in which modern Russia is unwilling to come to terms with them” Read more...

The best books on Contemporary Russia 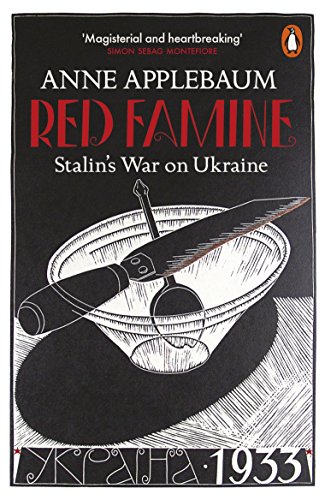 Red Famine is Anne Applebaum’s prizewinning book about the Holodomor (1932-3) a “term derived from the Ukrainian words for hunger—holod—and extermination—mor.” Nearly 4 million Ukrainians died as Stalin deliberately set out to make a famine caused by collectivization worse. 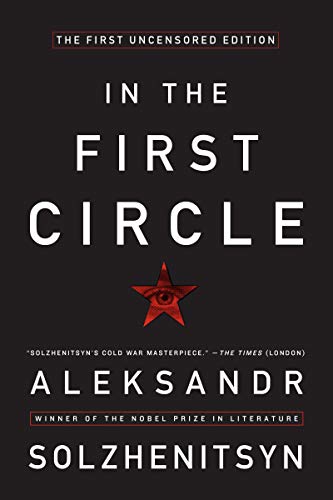 ***Aleksandr Solzhenitsyn was winner of the 1970 Nobel Prize in Literature***

“What this book helped me to do is think of Stalin as a cross between Big Brother and the Wizard of Oz. His presence is everywhere, but he’s nowhere and doesn’t really show himself very much. And, actually, in those four chapters, the real Stalin is this rather pathetic, elderly man with yellow teeth who doesn’t wash. He’s just insignificant, somehow. He doesn’t command respect or authority from his persona. He commands authority because of the system he’s at the center of.”

“The Gulag is a very microcosmic, intensive form of Stalinism and other writers—like Shalamov for example—have described the Gulag in a way that is unforgettable. But as a broad canvas, albeit set in a very privileged part of the Gulag, of how this Nineteen Eighty-Four world works, The First Circle does more than any other book to get us there.” Read more... 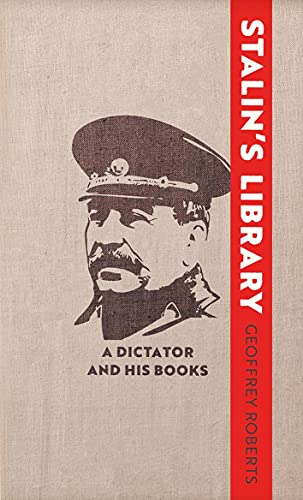 Stalin's Library: A Dictator and his Books

“If you’re reading this, you probably like books and may be disappointed to learn that Stalin was also a voracious reader. Stalin’s Library: A Dictator and His Books is by British historian Geoffrey Roberts, author of several books on the Russian leader (plus one on Zhukov). Stalin had more than 20,000 books in his library and they weren’t just for show.” Read more... 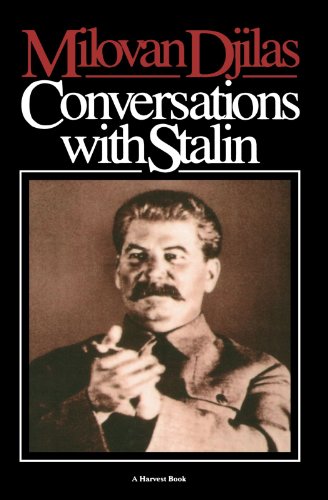 “Djilas was Tito’s number two, and negotiated with the Kremlin on various diplomatic missions. He’s a terrific source on the grotesque late-Stalin court – the ghastly, drunken, late-night banquets at Stalin’s dacha, the bullying, fear and paranoia; the way the whole Kremlin circle was completely cut off from reality. Stalin had always been suspicious of Leningrad, disliking its Europhile bent and fearing it as an alternative centre of power. After the war, he purged the city’s party leadership and cracked down on its intelligentsia, most famously on the poet Anna Akhmatova, whose son, having been released from the Gulag to fight for his country, was sent straight back to the camps. Stalin did not, however, engineer the siege–which is one theory that has been around.” Read more...

The best books on The Siege of Leningrad 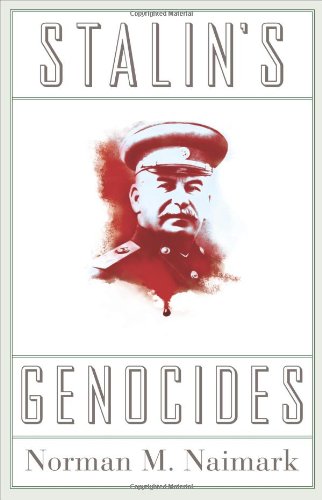 A short book (less than 200 pages) on Stalin's crimes by American historian and genocide expert Norman Naimark. As he points out, there is considerable disagreement about how many were killed as a result of Stalin’s policies and actions and a lot depends on how ones defines 'mass killing.' Naimark comes down on a figure of 15 to 20 million dead as a result of Stalin’s policies from 1928 to 1953. 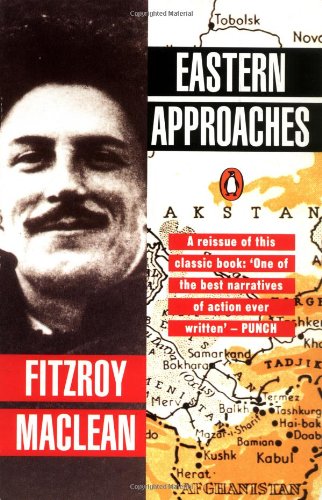 “Maclean was one of the great characters of the 20th century. He was a junior diplomat in Moscow in the late 30s and then went on to join the SAS. During the war he kidnapped a Persian general who had collaborated with the Nazis. He was also a friend of Ian Fleming and partly an inspiration for the James Bond character. His account of the Soviet Union in the 30s was quite brilliant. A lot of journalists in those days were making excuses for communism, suggesting it was a hope for the future and were putting the best possible spin on it. But his account showed the whole hopelessness of the Soviet empire – its incompetence and its evilness. He did a brilliant account of the great Stalin purge trials, when most of the leading communists of the day were destroyed by Stalin. That whole bleak period was brilliantly described by Maclean. He showed up the hollowness and incompetence of the whole Soviet system. This is a very carefully worded account of life in those early days after the revolution, one of the first exposés of that system. He tells one particular story when he was a young diplomat. He went to a cocktail party and had a relationship with a young Russian ballet dancer who then disappeared. He had a phone call from her mother saying she’d disappeared and that she’d never forgive him.” Read more... 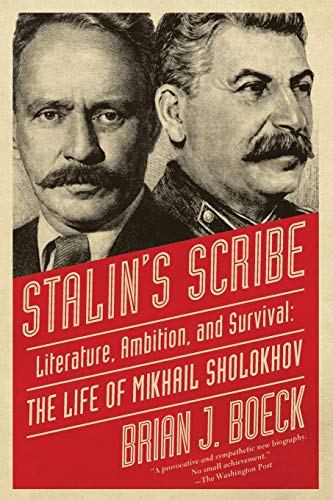 ***Mikhail Sholokhov was winner of the 1965 Nobel Prize in Literature***

“With Sholokhov what is interesting is that he’s a man of many mysteries. It’s about the question of lies and fake news, but in a different way than we deal with it now. He’s someone who becomes the ideal Soviet writer. But his official biography has a lot of lacunas. Certain things are hidden, and other things are actually exaggerated and Brian Boeck goes through that. Sholokhov is a man who wrote so much and was politically exceptionally important, but this is the first comprehensive biography about him. It’s a political biography, but not only. There are questions, like whether his best known and most brilliant work, And Quiet Flows the Don, was stolen or not, whether he really wrote it or not, what his relationship with Stalin was. In my reading, it’s about a talent being subdued and corrupted…It’s an excellent piece of work by a historian. Boeck goes and consults the archives, some materials for the first time. He was going on an almost yearly basis to the area from which Sholokhov comes, the Rostov-on-Don area in southern Russia…It’s the work of a Western scholar who is really very immersed in his subject and in the psychology of the place that he writes about. He brings so to speak local knowledge and sensibilities to a history of one of the top Soviet intellectuals.” Read more...